Year 5 took a step back in time for their Victorian Day at Beaulieu. On arrival, pupils were thrilled to be met by an old double-decker bus and driven in glorious sunshine to the front of Palace House. The children lined up in separate lines for girls and boys and were greeted by the rather stern governess, Miss Clark. Miss Clark proceeded to check the children’s posture, dress and cleanliness. Bitter aloes was recommended for the nail biters; wooden back-boards or holly under the chin to improve deportment.

The pupils had a wonderful tour of Palace House which was decked out in all its Christmas finery. Year 5 explored the jobs that were undertaken by children in Victorian times: the role of housemaid or kitchen maid for the girls; footman or chauffeur’s assistant for the boys. In the afternoon they visited the Motor Museum for an informative tour of early Victorian motoring followed by a contrasting example of modern transport – an exciting trip on the monorail. All the children looked fabulous in their Victorian outfits and parents will be pleased to know they were all offered employment as servants at Palace House and can begin their jobs straight after Christmas! 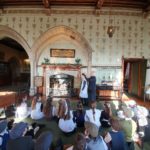 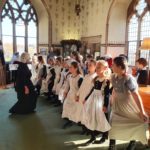 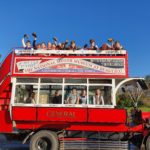