There is one sound that is both unmistakable and irresistible, one that every parent will be all too familiar with from three in the morning wake-up calls. The sound of a baby in distress is one we are naturally predisposed to be unable to ignore; the shrill shrieking has to be answered and rightly so. This week’s media has echoed to the sound of a different cry of distress, shrill in its own way and commanding attention which is all the more pressing for its historic source and current angst.

The Hobbesian analysis of society as a context, where people gather under certain rules and obligations the better to avoid what might be otherwise nasty brutish and brief, is long remarked. I suspect he was wrong to assert that those who disagree with society are without its bounds, it determines that they are voiceless because of their lack of acceptance. But what of their exclusion? Does being excluded mute their voice and if muted to what ends might the excluded go to converse with those who have removed their voice? Indeed, if one grows in a context where this exclusion is the currency of common living it begs the question how might their voices be heard at all, what language is used to attend to it? If there is no shared language how is any dialogue possible, who is there to translate or interpret?

Where the voiceless find voice in protest it can be met with the irrationality of a conventional response. This unthinking response can see protest as trouble, disaffected militants, those who would use the mob to destroy, anarchists jumping on a cause to promote their own ends or a conspiracy theory that uses unrest to fuel further suspicion of the dispossessed. I suspect that no one group of people in any area of society or human endeavour are mono-motivational, every group has within it competing voices and motives, competing outcomes. To limit the scope of those who would have their voices heard with a deafening rhetoric of dismissiveness creates further division.

I do not believe the protest need be destructive, but perhaps I would say that. Regini Rini takes a different view. Where the experiences of those within our society are so radically different from those for whom society is open to listen, she argues a different degree of accountability should be applied. Are those who feel without voice or at least unheard, guilty for not conforming to societal norms when that same society has shunned them? You are barred by the club that refuses to have you as a member, a Marxian (Groucho not Karl) juxtaposition and then critiqued for not following club rules. Rini’s is a challenging thesis. It suggests that a normative moral position cannot be held in a context where values are not shared, and convention is not listening. Perhaps within the great transitions in art the establishment had to be taken down for the new dawn to be observed?

I am no fan of destruction; I have always been on the side of the less spectacular suffragists than the much more iconic suffragettes. How were rights for women extended in the 20th century? Was it the Pankhurst endorsed acts of sabotage, the hunger strikes or the Fawcett approach of reasoned and engaged politicking? Maybe it was a combination of both in the coincidence of the catastrophe of World War One. One point is sure, for all the direct action or reaction, all parties at some point had to sit down to listen and to be heard. There is no virtue in looting shops or burning buildings but there is an ‘irrational’ reason, it makes a point, it gets your attention. It allows us to consider, perhaps to begin to engage or understand if not to endorse. It is not impossible to imagine the frustration of those who have been repressed for years by others, held back from being themselves and the freedom to be, either by legislation or custom and practice. But imagining is not experiencing, considering it is not living with it. 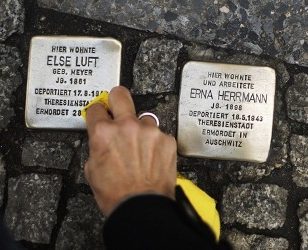 Over the week in school we have been listening to the voices, cases of the dispossessed, those who belong but for whom the very experience of belonging is compromised by their life experiences. Our work is to build not to destroy, neither is it to gloss over and forget. Tearing down statues may well be virtuous, but how are we to make sense of our past? Do we need ‘stolpersteine’ to trip us up akin to the cobbles of Berlin and Frankfurt? In re-reading their stories, in hearing their testimony, History gives voice to the voiceless. In an age of communication, everyone is talking, some have things to say, some things that are said make sense others trite meaningless soundbites, but who is really listening?

Giving children the opportunity to be themselves, to discover or create that self is part of the journey of becoming. We steward that journey by talking with children, listening to them in forms, groups, classes and enlightening their minds with reason, knowledge and discussion. Protest might be the language of the unheard, but it is in this listening and the hearing of voices less remarked which allows us to topple the Leviathan.

Back to News
Black Lives Matter: Making sense of the protests
A warm welcome back to the Prep School