This week Embley students had the exciting opportunity to tour the Williams Formula 1 team headquarters. The day started with a talk from the operations director, James Colgate, in which he talked about the extent of the Williams’ business and how it extends all the way from Formula 1 cars, to road cars and even to airfoils for shop refrigeration shelves.

Next, students were taken to the Williams Heritage Museum and a grand display of the helmets of all the Williams World Championship winning drivers, ranging from the first Williams world champion, Australian legend Alan Jones, to the most recent world champion, Jaques Villeneuve. As students went deeper into the museum, they were treated to an amazing collection of the most prominent Williams Formula 1 cars.

The Williams collection is the largest privately owned collection of historic formula one cars, and contains many legendary cars such as the Adrian Newey and Patrick Head designed FW14, which won ten of the 16 races held that year, on its way to both the constructors and drivers world championship with British hero Nigel Mansell.

After lunch, and an informative talk by on the many different opportunities allowed by apprenticeships offered at Williams, they went for a factory tour. Getting to see the amount of work and precision that goes into building the cars was astonishing, and really puts the sport into a new perspective. The effort that goes into even the smallest parts of the car in order to increase performance was astounding, and with around 1,000 staff all working 24/7 it is easy to see how Formula 1 is the pinnacle of motorsport.

Overall the trip to Williams was a thoroughly informative, educational and fun day. We all wish Williams Formula 1 team the best in their upcoming season, and many thanks for the opportunity to visit their factory and headquarters. 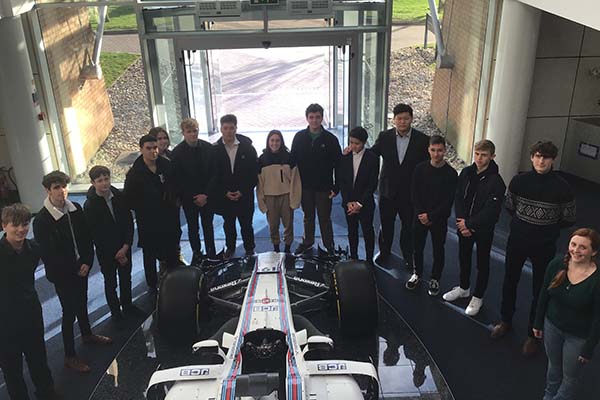