Embley goes to Wembley (and Lords)

As part of the A Level PE course sociocultural unit, our students visited two of England’s most famous sporting venues: Lords and Wembley. Georgia and Emily, Year 13, provide an account of the day.

During a tour of Lords, we learnt about the history and development of cricket. We spent time in the pavilion and on the players’ balcony, and enjoyed a rare opportunity to explore the ‘long room’ which is usually only open to members (for which there is 27 year waiting list!). We were very surprised to learn that the first women’s international game was played at Lords in 2017, outlining the extent of gender inequality in traditional sports such as cricket. We even got a photo opportunity with the ashes urn, and we promised the tour guide that the real thing would return after the next series.

In the afternoon, we headed to Wembley Stadium where we had another guided tour and got to walk the royal staircase! Our guide gave us some very interesting facts such as how all the glass in the stadium is angled at 5° to improve the atmosphere of big games. We also learnt about the history of the old ‘twin towers’ stadium, and how it somehow once hosted a ski jump competition within its walls. The best part of the day was seeing the shirts of footballing legends like Bobby Moore and Wayne Rooney, as well as current captains Harry Kane and Steph Houghton.

We’d like to say a big thank you to Mr Lawson and Mr Leathem for organising such a brilliant trip that was enjoyed by all. 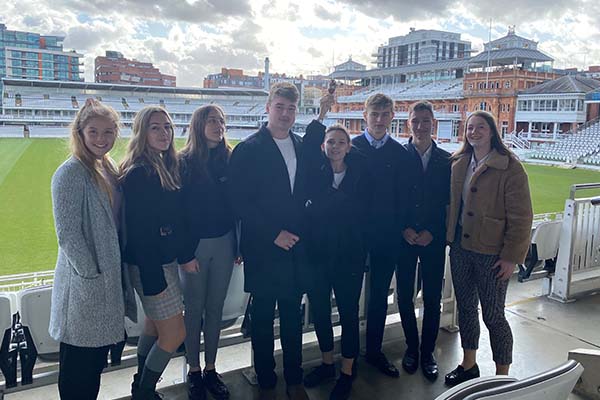