As part of our STE@M Festival, Dr Jon Copley visited Embley to give an evening lecture about exploring the deep ocean, his field of research. Megan in Year 12 provides a review of the evening…

Jon is a professor at Southampton University and was a scientific advisor for the BBC series Blue Planet II. Jon has taken part in many expeditions to explore the deep ocean and is a Bathynaut – an astronaut equivalent for the deep ocean. He has recently released his own book called ‘Ask an Ocean Explorer’.

During the evening’s discussions, Jon explored the history of ocean mapping by telling us about his heroes, including Marie Tharp and Matthew Fontaine Maury. Both paved the way for the modern mapping of the sea bed that we know today through the use of ropes with a weight on the end to echolocation technology which we use variations of today.

Jon has been part of the discovery of the life on hydrothermal vents which has changed how we view biology on this planet. Hydrothermal vents give out chemical energy which organisms thrive on and disproves everything we believed about sunlight being needed for life. It was really interesting to see some specimen animals from these habits that had been preserved in Perspex. 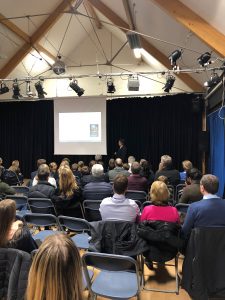 Jon was extremely engaging and there were endless questions for him after the talk had finished. Some of the questions covered topics such as his biggest fear when diving up to depths of 6km, the threat of plastics to the ocean (as highlighted in many of our STE@M activities) and the threat of global warming as well as some more light-hearted questions such as does he get motion sickness.

We are thankful Jon came to talk to us and give us insight into his field of knowledge, definitely inspiring pupils and parents alike.